Yen rises broadly as the markets start the week with risk aversion in Asia. On the other hand, Canadian Dollar is trading as the weakest, leading other commodity currencies lower. European majors are mixed together with Dollar for the moment. The economic calendar is rather light today and focuses will stay on development in the risk markets. Though, attention will be turning to ECB meeting later in the week, in particular its new forward guidance.

Technically, AUD/JPY and CAD/JPY has already broke out to the downside. Eyes will be on 129.60 support in EUR/JPY and 150.64 support in GBP/JPY. Break of these levels will align the developments with other Yen crosses and solidify Yen’s near term strength. At the same time, USD/CAD is edging close to 1.2653 structural resistance. Break there will also solidify the case of medium term bullish reversal, which could then see USD/CAD heading back to 1.3 handle. 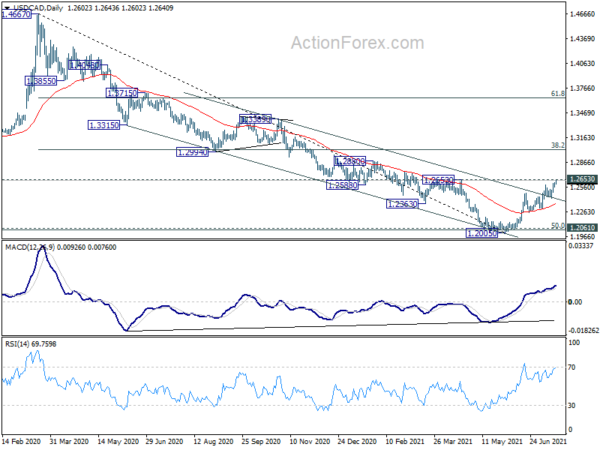 Hong Kong HSI gaps down after US warned of business risks

Asian markets are trading broadly lower as led by Hong Kong HSI, which is down nearly -1.6% at the time of writing. In a late move last week, the US administration published a nine-page Hong Kong Business Advisory, jointly by the departments of State, Treasury, Commerce and Homeland Security. The document warned US firms of encountering a number of risks posed by China’s national security law in the city.

Today’s gap down in HSI suggests that corrective rebound from 26861.87 could have completed at 28218.52 already. The failure to even touch 55 day EMA is a near term bearish sign. The index could at least have another test on 26782.61 key medium term resistance turned support. Such development to cap gains in other Asian markets, and give Yen additional support. 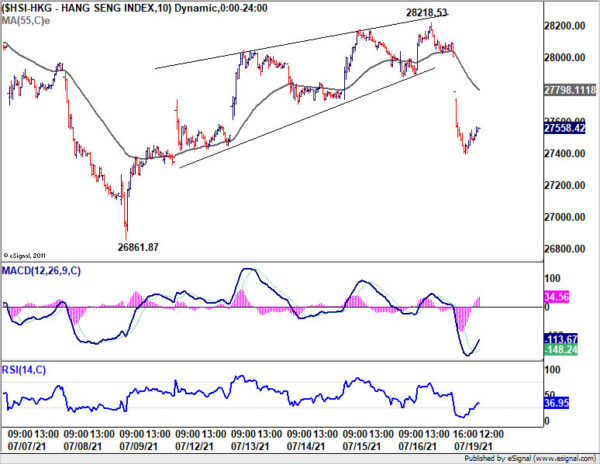 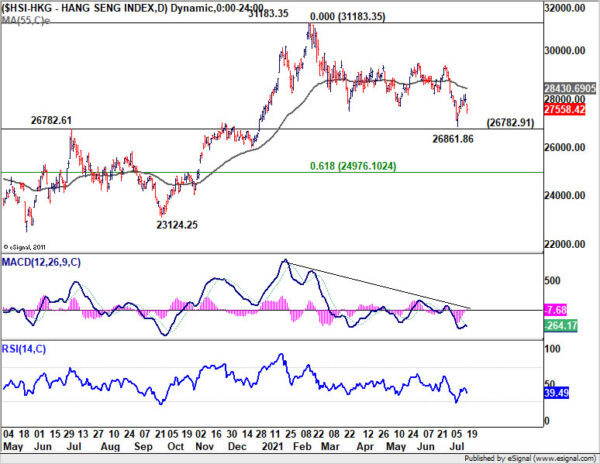 AUD/JPY and CAD/JPY break out to the downside on risk aversion in Asian markets. AUD/JPY’s fall from 85.78 resumed and hits as low as as 80.98 so far. Rejection by 4 hour 55 EMA is a near term bearish sign and outlook will stay bearish as long as 82.80 resistance. 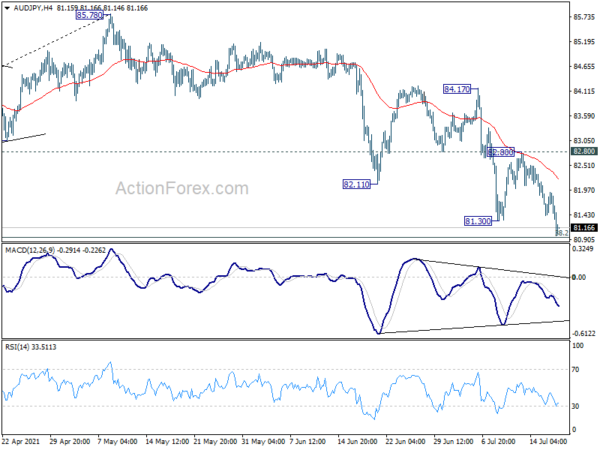 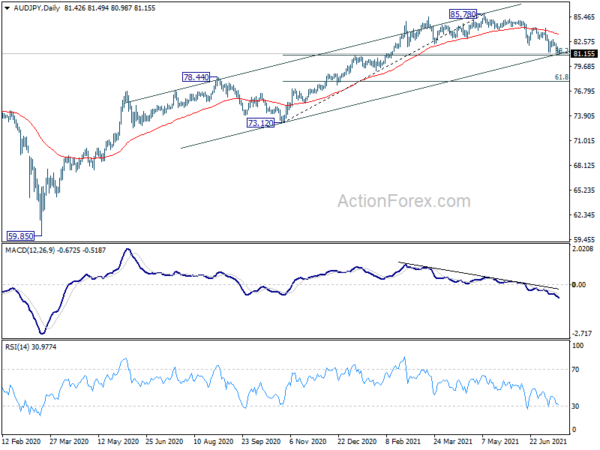 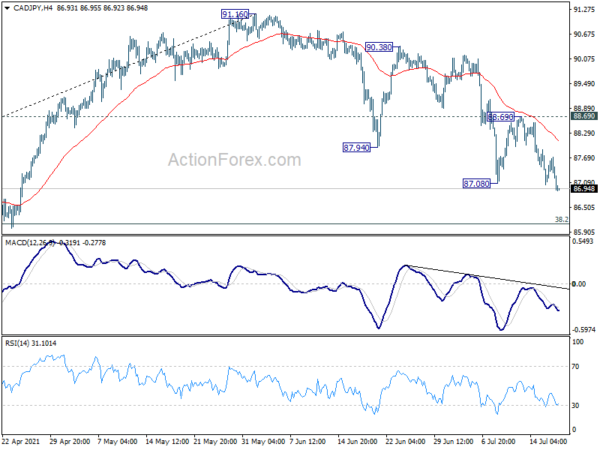 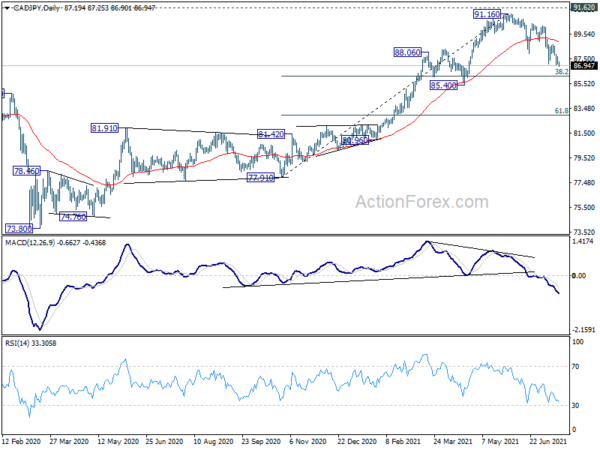 ECB meeting will be the major focus this week. In particular, it’s known that the central bank will change it forward guidance to reflect the new 2% symmetric inflation target. Other than that, there is little chance for any change in monetary policy. It’s too early to indicate what ECB would do in Q4 regarding the pace of asset purchases, not to mention adjustment in interest rates.

Also on central bank front, RBA and BoJ will release meeting minutes. On the data front, major focuses will be towards the end of the week, with PMIs from Australia, UK, Eurozone and US.

EUR/AUD’s break of 1.5976 resistance suggests resumption of whole rise from 1.5250. Intraday bias is back on the upside for 1.6003 key resistance level. Decisive break there will argue that rise from 1.5250 is at least correcting the whole fall from 1.9799. Further rally would be seen to 1.6827 resistance next. For now, further rise is expected as long as 1.5773 support holds, in case of retreat. 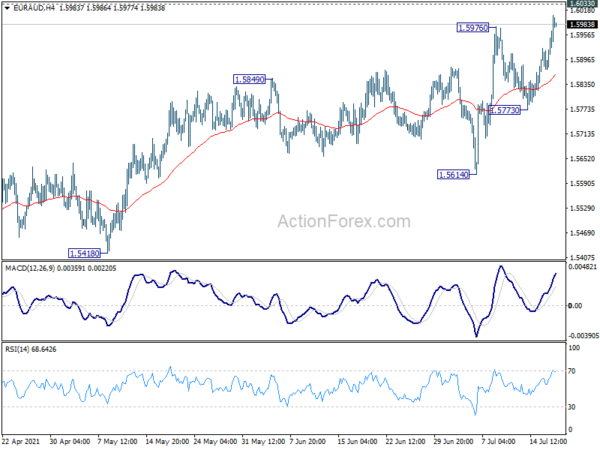 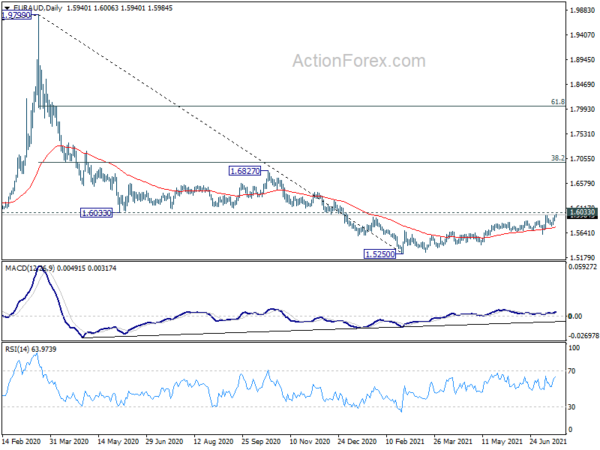