Yen selloff is the main theme in the Asian markets today, in particular as USD/JPY breaks out on the upside with acceleration. The move was fueled by strong rally in US treasury yields overnight, as well as rally in Nikkei and benchmark JGB yield. Dollar is currently the strongest one for the, reversing much of the pre-holiday decline. Commodity currencies are also slightly firmer, but we’ll see if Europeans could outperform them.

Technically, in addition to Yen crosses, we’d also pay attention to EUR/USD. It was knocked off by 1.1382 resistance despite a very brief breach during illiquid holiday markets. EUR/USD could be heading back to retest 1.1185 support and break will resume larger down trend. Such development, if happens, could affirm the case that Dollar is really on the move. 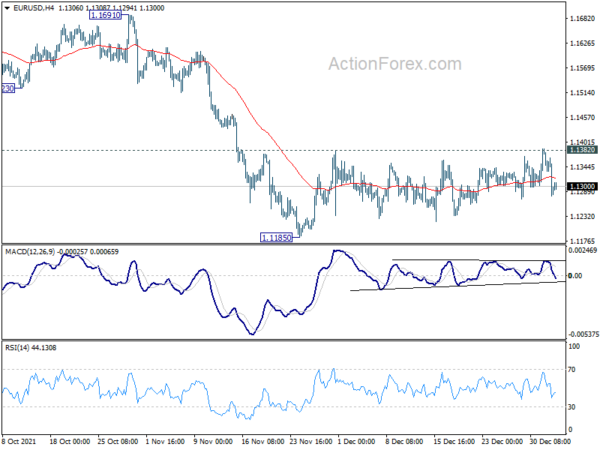 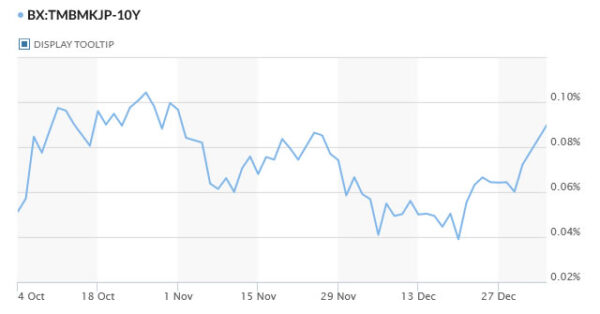 US treasury yields surged sharply overnight as investors continued to adjust themselves “living with the virus”. Omicron is now generally taken as being much less harmful to the global economy as initially feared, despite record infection numbers. 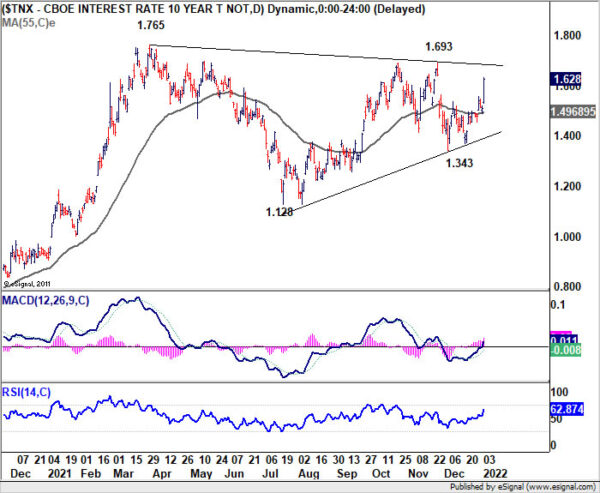 The picture in 30-year yield is similar. It’s now back above 2.0 handle after yesterday’s rise. Corrective pattern from 2.505 should have completed with three waves down to 1.678. Further rally should be seen to 2.177 in the near term. Sustained break there will raise the chance that it’s already resuming the up trend from 0.837 (2020 low) through 2.505 high. 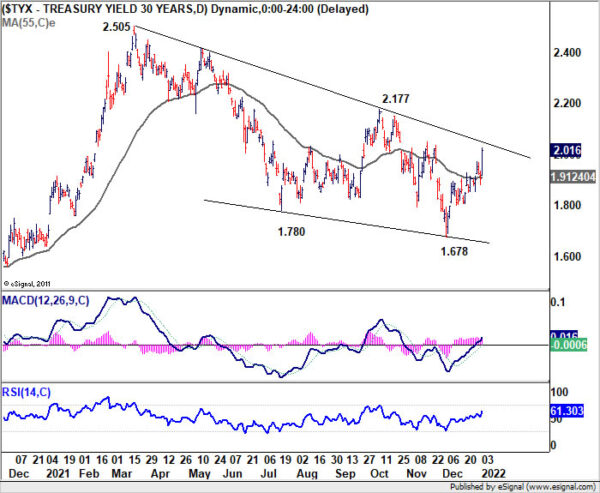 China Caixin PMI Manufacturing rose to 50.9 in December, up from November’s 49.9, above expectation of 50.0. The data signaled a renewed improvement in the sector with best reading since June. Caixin said rise in output was stronger amid renewed upturn in sales. Input cost inflation eased to 19-month low. Business confidence weakened amid pandemic and supply chain worries.

Wang Zhe, Senior Economist at Caixin Insight Group said: “To sum up, manufacturing demand and supply improved in December with easing inflationary pressure. But the job market was still under pressure and businesses were less optimistic, indicating unstable economic recovery. The repeated Covid-19 flare-ups and sluggish overseas demand were factors of instability.”

Japan PMI Manufacturing was finalized at 54.3 in December, slightly lower than November’s 54.5. But that was well above 2021’s average of 52.7. Markit said output and new orders increased at slower rates. Employment level rose at fastest pace in nearly four years. Business optimism eased to four-month low.

Usamah Bhatti, Economist at IHS Markit, said: “Domestic markets were buoyed by a gradual recovery from the COVID-19 pandemic however a sharp rise in cases, particularly in South Korea hindered international demand and continued to disrupt supply chains across the sector… Delivery delays and material shortages remained a dampener on production and sales… Average lead times across the final quarter of 2021 deteriorated further… Though still optimistic, Japanese goods producers were wary of the continued impact of the pandemic and supply chain disruption, which resulted in confidence dipping to the softest since August.”

FOMC minutes, ISMs and NFP to return to focus

Minutes of the December FOMC meeting will be a major focus this week. At the meeting, Fed announced that it would speed up tapering and end it in March instead of June. Also, the new projections saw three rate hikes this year. The markets would like to see more in-depth information an related discussion.

Meanwhile, US will also release ISM indexes and non-farm payrolls, Eurozone CPI flash and Canada employment, China Caixin PMIs will be among most anticipated data release. 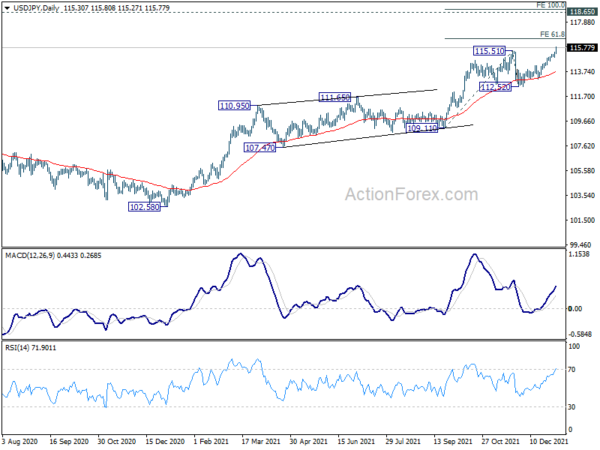