Yen’s selloff is a dominant theme in the markets today as major global treasury yields strengthen. In particular, Germany 10-year bund year is back at around -0.18, above -0.2 handle. US 10-year yield is trading at 1.675 at the time of writing, with a take on 1.7 handle before weekend a possibility. Dollar recovers mildly after solid GDP and better than expected jobless claims. But it’s merely in consolidation against others except Yen. Canadian Dollar continues to be the strongest one, but Aussie and Kiwi retreat.

US GDP grew 6.4% annualized in Q1, slightly below expectation of 6.5%. BEA said: “The increase in real GDP in the first quarter reflected increases in personal consumption expenditures (PCE), nonresidential fixed investment, federal government spending, residential fixed investment, and state and local government spending that were partly offset by decreases in private inventory investment and exports. Imports, which are a subtraction in the calculation of GDP, increased.”

Eurozone economic sentiment rose to 110.3, back above pre-pandemic levels

Eurozone Economic Sentiment Indicator rose strongly by 9.4 to 110.3 in April, above expectation of 103.0. It also scored markedly above its long term average and pre-pandemic level for the first time since the coronavirus outbreak in Europe. Employment Expectations Indicator also jumped 9.3 pts to 107.1), lifting it above long-term average and pre-pandemic level too.

ANZ said: “Given supply-side constraints are biting so hard, the confidence and robust employment intentions of firms may represent greater upside to wages and prices than to actual growth. It’s looking like a pretty inflationary soup. The RBNZ will be keen to look through cost-push inflation as far as possible, because it’s temporary…. But there’s clearly plenty of demand and risk-taking out there. The notion that the RBNZ might be overcooking things may well gain some traction in the months ahead, especially with headline inflation expected to rise above 2% in mid-2021.”

USD/JPY’s rebound from 107.47 resumed after brief retreat. Intraday bias is back on the upside for 109.95 resistance first. Break till bring retest of 110.95 high. On the downside, break of 108.42 minor support will turn bias to the downside for 107.47 support again. 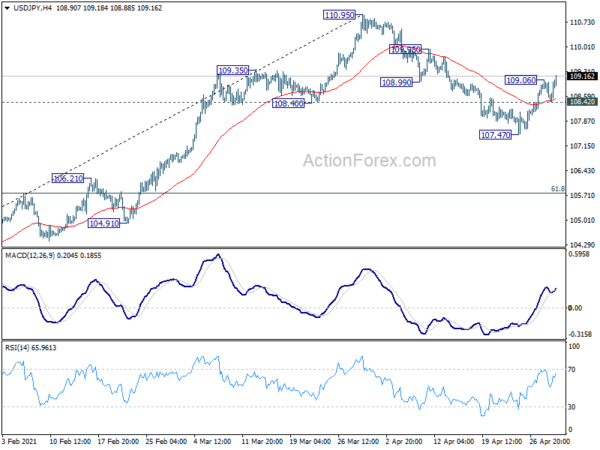 In the bigger picture, rise from 102.58 might have completed at 110.95, as the third leg of the pattern from 101.18 low. Medium term outlook is neutral first, as the pair could have turned into sideway trading between 101.18/111.71. We’d look at the structure and momentum of the price actions from 110.95 to gauge the chance of upside breakout at a later stage. 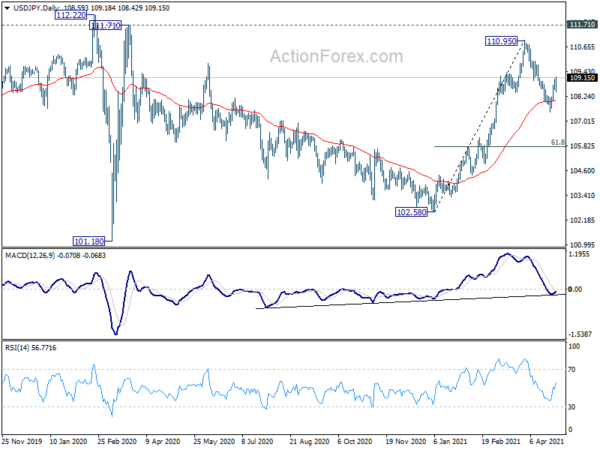