Risk sentiment turns a bit weaker today in the stock markets. But benchmark European and US yields are staging a strong rally. In the currency markets, Aussie is sold off is in delayed reaction to RBA’s dovish tapering, but Canadian is follow closely with selloff in oil price. Sterling is also falling in European crosses, probably in reaction to the government’s plan to raise taxes. On the other hand, Dollar is trying to rebound, other with Euro and Swiss Franc.

Technically, EUR/GBP’s break of 0.8601 resistance suggest resumption of rise from 0.8448 for 0.8668 resistance. We’ll keep an eye on 1.3730 support in GBP/USD and 151.32 support in GBP/JPY. Break of these levels would indicate more Sterling weakness to come. Meanwhile, we’d continue to pay attention 1804.70 support in Gold. Break there could sign a more sustainable rebound in the greenback. 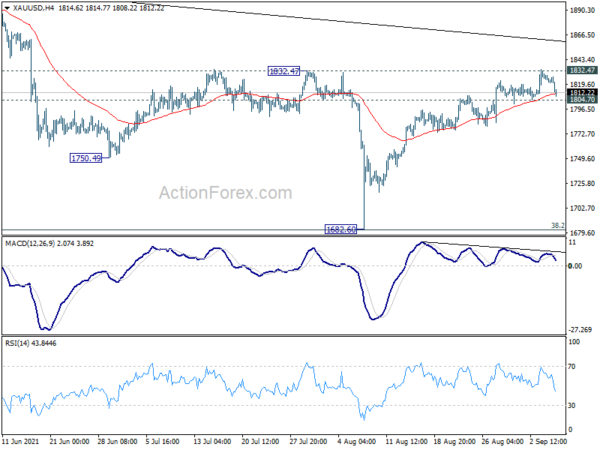 “Expectations fell markedly once more in September 2021. Although financial market experts expect further improvements of the economic situation over the next six months, the expected magnitude and the dynamics of the improvements have decreased considerably. Global chip shortage in the automobile sector and shortage of building material in the construction sector have caused a significant reduction in profit expectations for these sectors. This may have had a negative effect on economic expectations,” comments ZEW President Professor Achim Wambach.

Also from Germany, industrial production rose 1.0% mom in July, versus expectation of 0.7% mom.

BoE hawk Michael Saunders said he believed that the economy was now close to the pre-pandemic level. He’s worried that continuing with the asset purchase program would cause rise in medium-term expectation.

“I also worry that continuing with asset purchases, when CPI inflation is 4% and the output gap is closed – that is the likely situation later this year – might well cause medium-term inflation expectations to drift higher,” he said.

“Such an outcome could well require a more substantial tightening of monetary policy later, and might limit the committee’s scope to respond promptly the next time the economy needs more stimulus,” he added.

RBA tapers but extends QE, Delta to delay but not derail recovery

RBA kept with its tapering plan and announced to lower purchase of government securities at AUD 7B a week. But the program is extended until at least mid-February 2022, from mid November. At the same time, cash target rate is held at 0.10%. Target for April 2024 Australian government bond yield was also kept at 0.10%.

The central bank said the economy has been “interrupted by the Delta outbreak and the associated restrictions on activity”. GDP is expected to “decline materially” in Q3 with unemployment rate moving high over coming months. But the setback to economic expansion is “expected to be only temporary”. The Delta outbreak is expected to “delay, but not derail” the recovery. Economy will be growing again in Q4 and back to pre-Delta path in H2 of next year.

The decision to “extend” the asset purchases “reflects the delay in the economic recovery and the increased uncertainty associated with the Delta outbreak”. RBA pledged o continue to review on the program. Also, it maintained that the condition for rate hike “will not be met before 2024”.

Australia AiG services dropped to 56.6, outlook weak for another month or two

Ai Group Chief Executive, Innes Willox, said: “Increased COVID-19 cases and the lockdowns aimed at constraining the spread of the virus saw the performance of the services sector slump in August… With lockdowns in Victoria, the ACT and NSW set to continue this month and with new orders down on previous levels, the immediate outlook is for another weak month or two. In the meantime, a lot hinges on the healthy supply of vaccines, success in overcoming hesitancy about vaccination and clear and convincing leadership from across the National Cabinet.”

EUR/GBP’s break of 0.8601 resistance suggest resumption of rise from 0.8448. Intraday bias is back on the upside for 0.8668 resistance first. Firm break there will be a strong sign of near term bullish reversal at least. Next target is 0.8718 resistance. On the downside, break of 0.8561 support, however, would argue that the rebound has completed, and turn bias back to the downside for retesting 0.8448 low. 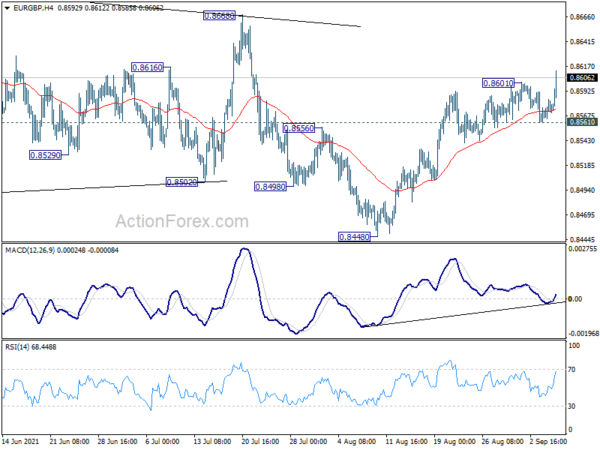 In the bigger picture, price actions from 0.9499 (2020 high) are still seen as developing into a corrective pattern. Deeper fall could be seen as long as 0.8668 resistance holds, towards long term support at 0.8276. However, firm break of 0.8668 resistance would argue that a medium term bottom was already formed. Stronger rise would be seen to 0.8861 support turned resistance to confirm completion of the corrective pattern. 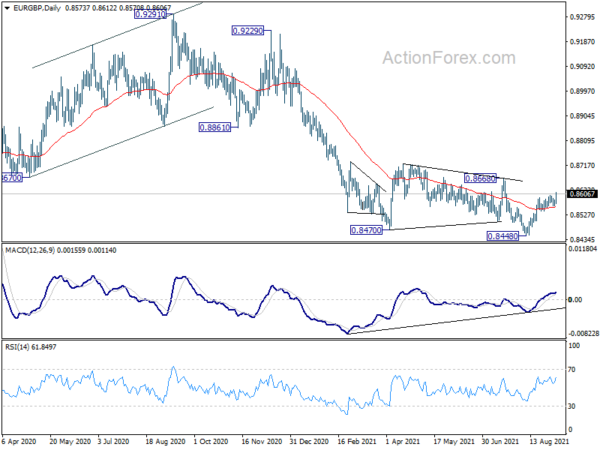