Dollar remains overwhelmingly the worst performer today, as selloff extends. There is little support from hawkish Fedspeaks, with some officials expressing openness to four rate hikes this year. Commodity currencies continue to be the biggest winners, as supported by resilient risk sentiment. In particular, US futures are pointing to higher open, and further rally could intensify the current moves. European majors are mixed, with Sterling’s rally in crosses slowing.

Technically, USD/JPY’s extended decline is a rather bad sign for the greenback. Sustained break of 55 day EMA (now at 114.10), with bearish divergence condition in daily MACD, will raise the chance that it’s already in medium term correction. Deeper fall could then be seen through 112.52 support ahead. That could be accompanied by EUR/USD’s break of 1.1598 fibonacci resistance. 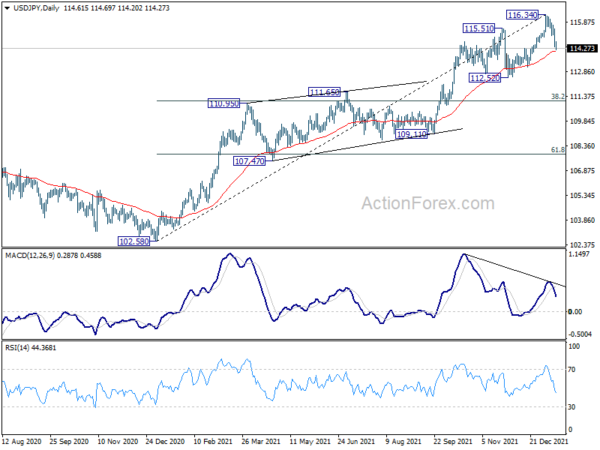 Fed Harker open to more than three hikes if required

Philadelphia Fed President Patrick Harker said in an FT interview, “I currently have three increases in for this year, and I’d be very open to starting in March. I’d be open to more if that’s required.”

“We don’t want to put the brakes on completely, but we do need to slow down some of the demand,” he said. “We can do something…  by raising the fed funds rate.”

As for the balance sheet run-off, Harker said if could start once interest rates were “sufficiently away” from zero. “I am very much in the camp of communicating over and over how we’re going to do this and then being methodical,” he said.

In the monthly economic bulletin, ECB said, “the global economy remains on a recovery path, although persisting supply bottlenecks, rising commodity prices and the emergence of the Omicron variant of the coronavirus (COVID-19) continue to weigh on the near-term growth prospects.”

“Supply bottlenecks are expected to start easing from the second quarter of 2022 and to fully unwind by 2023.” But “the future course of the pandemic remains the key risk affecting the baseline projections for the global economy.” Risk to growth outlook are “tilted to the downside” and balance of risks to global inflation is “more uncertain”.

Eurozone growth is “moderating” but “activity is expected to pick up again strongly in the course of this year.” Output is expected to exceed pre-pandemic level in Q1 of 2022. However, as some Eurozone countries have reintroduced tighter restrictions, “this could delay the recovery, especially in travel, tourism, hospitality and entertainment”.

ECB de Guindos: Inflation not going to be as transitory as expected

ECB Vice President Luis de Guindos said, “inflation is not going to be as transitory as forecast only some months ago. The assessment of risk for inflation is moderately tilted to the upside over the next 12 months.”

“And the reasons are quite simple. First, supply side bottlenecks are going to be there and are more persistent than we and many expected in the past,” de Guindos said. “And energy costs are going to remain quite elevated.”

Nevertheless, over the longer term, risks to inflation outlook are still balanced. Inflation are projected to fall back below ECB’s target of 2% in 2023 and 2024. 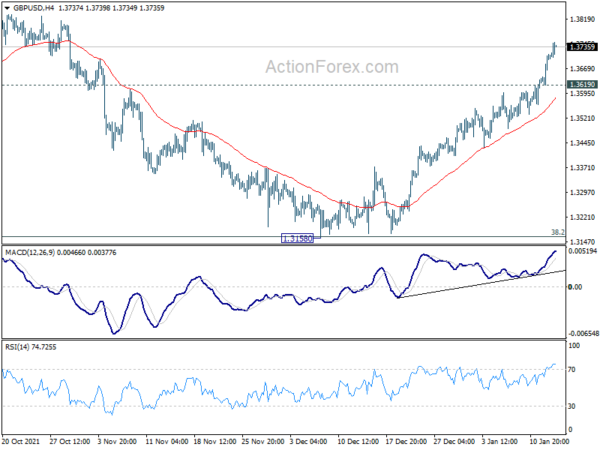 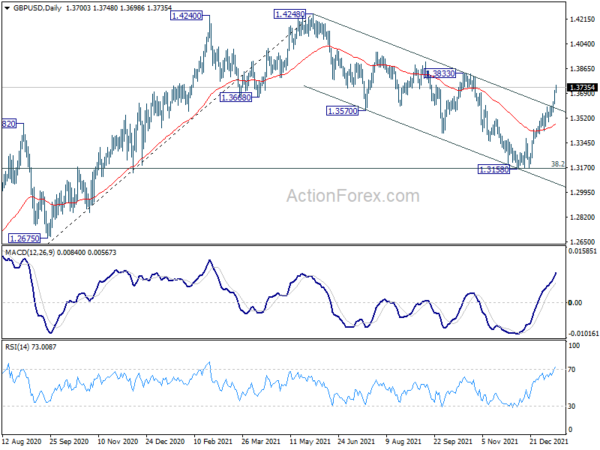