The markets are rather quiet in Asian session. Stock indexes are trading higher but no follow through buying is seen. In the forex markets, major pairs and crosses are stuck inside Friday’s range, with commodity currencies a touch firmer. Activity could remain subdued with an empty calendar for today. Yet, volatility is guaranteed with five major central bank meeting scheduled for the week, plus a lot of important data ahead. 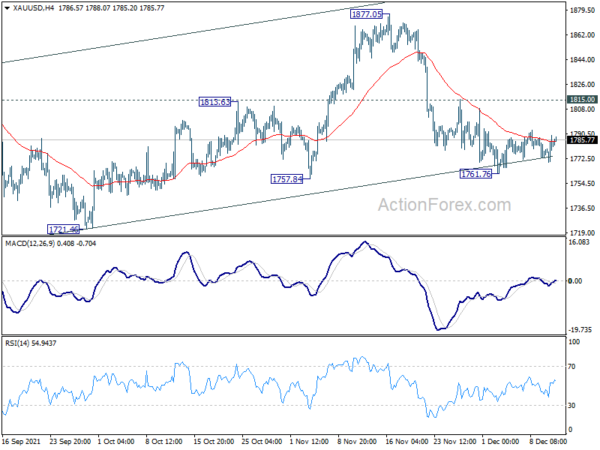 Large firms are expecting to increased capital spending by 9.3% in the year ending in March 2022, lower than expectation of 9.8%.

NZIER: NZ inflation to stay above RBNZ target mid-point through to 2025

NZIER lowered near-term economic outlook of New Zealand, reflecting the impact of pandemic restrictions, “which turned out to persist for longer than initially expected”. For the year to March 2022, GDP growth was revised down from 4.5% to 4.3%. But growth for 2023 was revised up from 4.5% to 4.6%.

Growing capacity pressures are contributing to a sharp rise in inflation. CPI is expected to 5.1% in 2022 (up from prior estimate of 3.0%), and remain elevated above RBNZ’s inflation target mid-point of 2% “through to 2025”.

NZD trade-weighted index forecast was revised lower “partly reflecting market disappointment at smaller than expected interest rate increased from the Reserve Bank in its November meeting.” NZD TWI is expected to peak at 74.5 for the year to March 2023 (revised down from 74.8), then ease to 72.7 in 2025.

Five major central bank will meet this week. Fed Chair Jerome Powell has already indicated that FOMC will consider faster pace of tapering. That would give Fed more flexibility to raise interest rates earlier to counter inflation, which is at multi-decade high. Fed’s new economic projections and more importantly the dot-plot of interest rate expectations would be watched closely.

ECB will need to signal what it’s going to with the Pandemic Emergency Purchase Programme next. It’s reported that the PEPP will still end in March as scheduled. But ECB would probably boost the regular Asset Purchase Programme temporary to smooth out the transition. The boost could come in as a form of envelope until the end of the year. Also, it could just lift the monthly purchases for a short period of time, and reveal later.

BoE officials had been talking up rate hike even before November meeting. But the outlook changed drastically after the arrival of Omicron and return to restrictions. Even a known hawk Michael Sanders turned cautious, preferring to wait and see Omicron’s impact first. So, it’s more likely that BoE will keep powder dry for the moment.

SNB is generally expected to keep monetary policy unchanged, and maintain that negative interest rate and the willingness to intervene remain necessary. BoJ will keep the parameters of the QQE with Yield Curve Control unchanged, but it might start scaling back some emergency funding.

The economic calendar is also ultra-busy. Here are some highlights for the week:

Intraday bias in EUR/JPY remains neutral at this point, as consolidation from 127.36 is extending. On the downside, break of 127.36 will resume larger pattern from 134.11 to 126.58 medium term fibonacci level. We’d look for some support from there to bring rebound. But sustained break of 126.58 will carry larger bearish implications. On the upside, break of 129.09 will bring stronger rebound to 55 day EMA (now at 129.66) and above. 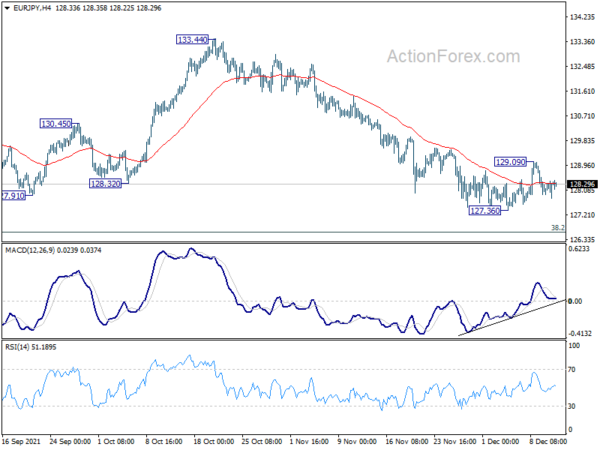 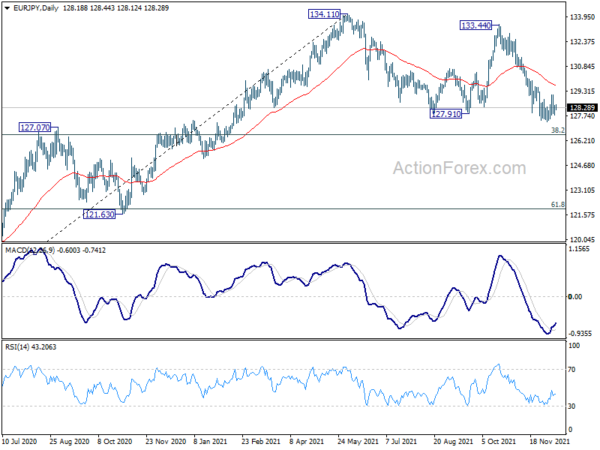