The forex markets are generally staying in tight range in Asian session, digesting last week’s moves. Euro remains generally soft and looks vulnerable to extend the near term decline, in particular against commodity currencies and Yen. Sterling is so far resilient, awaiting more BoE officials to speak up their mind regarding the chance of an imminent rate hike. Dollar will probably need to clear out 1.125/30 resistance zone against Euro decisively before making some committed moves elsewhere.

Technically, we’ll also pay some attention to Sterling pairs today. GBP/JPY has defended 152.35 temporary low late last week. But a downside breakout is still in favor. GBP/USD’s price actions from 1.3351 are clearly corrective looking, suggesting that a downside breakout should follow sooner or later. At the same time, EUR/GBP could also break through 0.8381 any time to resume recent fall. These forces will continue to counter each other and keep the Pound mixed.

BoE Governor Andrew Bailey said in an interview published over the weekend that the risks to the UK economy are “two-sided” at the moment. He said that “activity in the economy is slowing”. Also, “he proximate cause of many of these inflation issues is on the supply side, and monetary policy isn’t going to solve these directly”.

However, “the concern for us is what they classically call ‘second-round effects’, particularly in wage bargaining and the labour market,” he added. “If the economy evolves in the way the forecasts and reports suggest, we’ll have to raise rates. Which, by the way, is entirely consistent with what I said in October.”

Oil price extends its near term corrective decline in Asian session, with WTI dipping to 75.63. The move came as Japan Prime Minister Fumio Kishida said he is considering releasing oil from its reserves, in response to US request to quell high energy prices. He told reporters, “we want to draw a conclusion after thoroughly considering the situation each country faces and what Japan can do.”

WTI’s fall from 85.92 high is currently see as a correction to rise from 61.90 only. Hence, even in case of deeper fall, down side should be contained by 61.8% retracement of 61.90 to 85.92 at 71.07, which is also close to medium term trend line support. But break of 80.32 resistance is needed to indicate completion of the pull back. Otherwise, risk will stay on the downside in case of recovery. 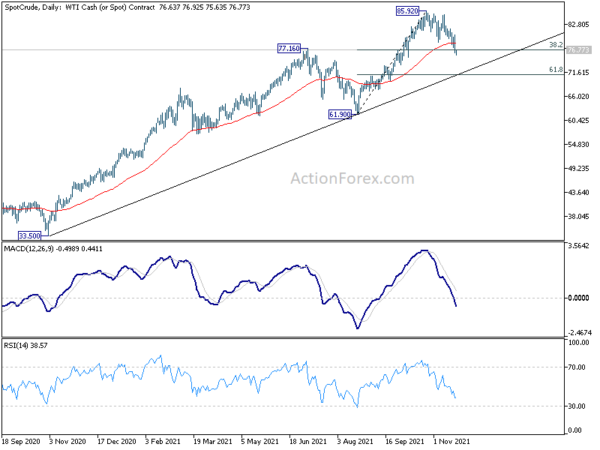 RBNZ rate decision is widely expected to raise OCR by 25bps to 0.75% this week. The question is whether it will surprise the markets and hike 50bps. But it should note that based on the latest RBNZ survey of expectations, a hike to 0.75% is the consensus, followed by three more bps to 1.5% for next year. Hence, we don’t expect RBNZ to press the panic button for now, but just continues to sound hawkish, setting the stage for more tightening later.

On the central banks front, both Fed and ECB will release monetary policy meeting minutes. While investors are eager to know the debates on timing of rate hike, main focuses would probably be more on US President Joe Biden’s pick of he Fed Chair. Jerome Powell and Fed Governor Lael Brainard are currently the favorites and we’ll see who would get the job. ECB minutes will likely just reiterate the dovish stance.

Regarding data, PMIs will take the center stage, shedding lights of activities, prices and employment in Australia, Eurozone, UK, US, Japan. Other focuses will include Germany Ifo business climate, US PCE inflation and durable goods orders, Swiss GDP as well as New Zealand retail sales.

Intraday bias in EUR/GBP remains neutral first and consolidation from 0.8381 temporary low could extend. In case of another recovery, upside should be limited by 4 hour 55 EMA (now at 0.8452). On the downside, break of 0.8381 will resume larger down trend from 0.9499. Intraday bias will be back to the downside for 0.8276 key long term support.

In the bigger picture, price actions from 0.9499 (2020 high) are still seen as developing into a corrective pattern. Deeper fall could be seen as long as 0.8593 resistance holds, towards long term support at 0.8276. We’d look for bottoming signal around there to bring reversal. However, sustained break of 0.8276 will but a sign of long term bearish reversal. 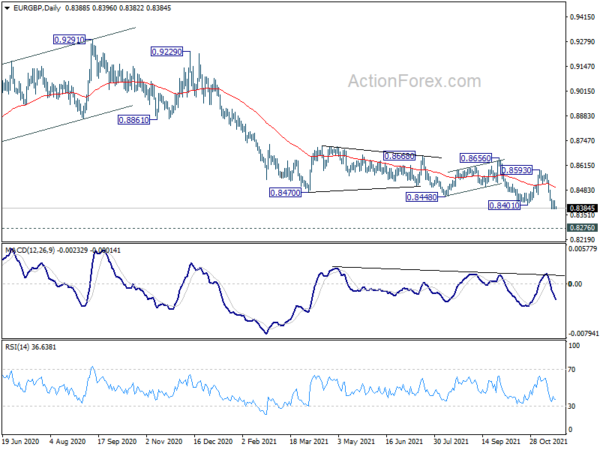