Investor confidence was shattered by the news of the heavily mutated B.1.1.529 coronavirus variant, now called omicron. WHO warned that this variant has a large number of mutations, some of which are concerning. It added that preliminary evidence suggested an increased risk of reinfection with this variant. It may also have a growth advantage to other variants, with faster rate of infections. It’s also still unknown if this variant is vaccine-resistant.

Yen and Swiss Franc ended the week as run-away leaders as global risk markets were in free-fall. Commodity currencies were the worst performing ones, as lead by New Zealand Dollar despite RBNZ rate hike. Meanwhile, Euro, Sterling and Dollar were mixed, with the greenback giving away much of the earlier gained grounds. While markets will likely stay risk-off for a while, the long term trends are not threatened yet. But of course, we’ll have to wait-and-see how things develop.

DOW took out both 55 day EMA and medium term channel support with the steep selloff late last week. The development suggests that a medium term top was formed at 36565.73, on bearish divergence condition in daily MACD too. At this point, we’re treating the fall from 36565.73 as a correction to the rise from 26143.77 first. While deeper decline would be seen, the first line of defense will be at 55 week EMA (now at 33291.01). Strong support could be seen there to bring rebound and set the range of consolidations. 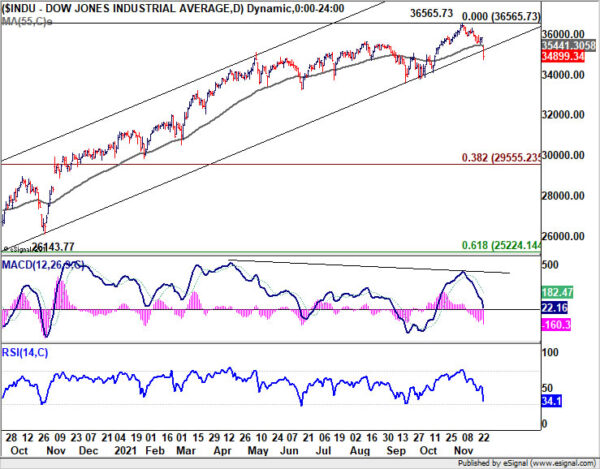 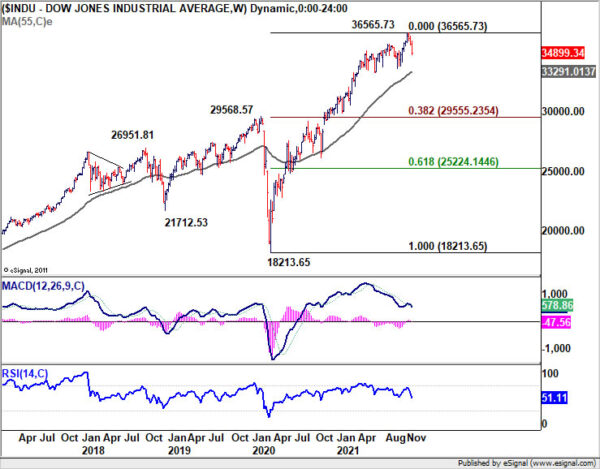 10-year yield also tumbled sharply after breaching 1.691 to 1.693 just very briefly. We’d look for strong support from 1.415 to bring rebound to set the range, even though a break of 1.765 will remain distant in terms of time. However, sustained break of 1.415 support could be accompanied some fundamental change in the global economic outlook. That is, the world might be back to a never-ending cycle of lockdowns and re-openings. In that case, TNX could head back to 1.128 before having some support to reverse. 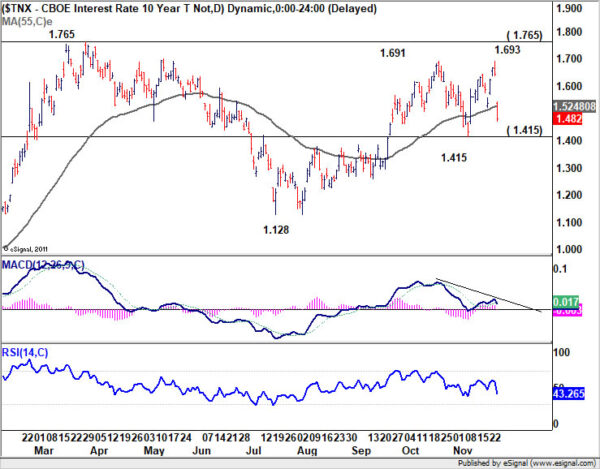 DXY topped at 96.93, now in near term consolidations

Dollar index rose to 96.93 last week but reversed from there. Considering the depth of the subsequent fall, a short term top should be formed. But for now, it’s seen as engaging in a near term consolidation pattern only, as long as 95.51 support holds. We’d expect rally resumption to 61.8% retracement of 102.99 to 89.20 at 97.72 sooner rather than later. However, firm break of 95.51 will indicate that DXY is at least in a medium term correction. Deeper would be seen back to 55 day EMA (now at 94.45). 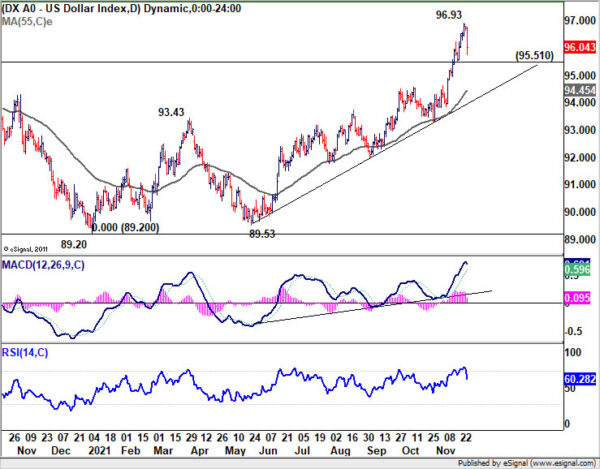 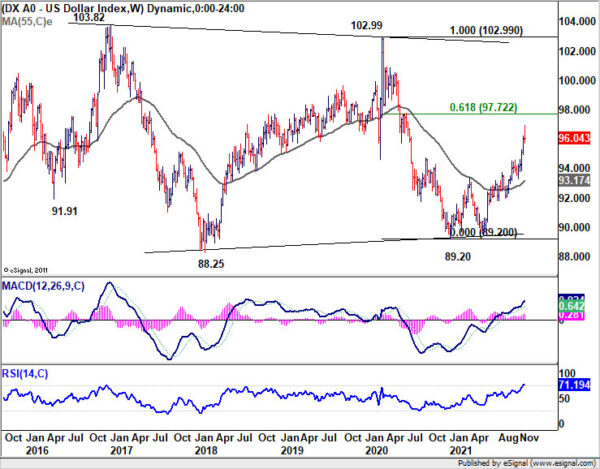 NZD/JPY could drop to 73.70 before finding a bottom

NZD/JPY ended as the biggest loser last week, despite RBNZ rate hike. Bearish divergence condition in weekly MACD, and the momentum of the fall, argues that 82.49 might be a medium term top already. NZD/JPY could now be correcting the whole up trend from 59.49 (2020 low). Immediate focus will be on 55 week EMA (now at 76.75). Sustained break there will bring deeper decline to 38.2% retracement of 59.49 to 82.49 at 73.70 before finding a bottom. Also, NZD/JPY will have to get back above 55 day EMA (now at 79.54) to revive near term bullishness, or risk will stay heavily on the downside. 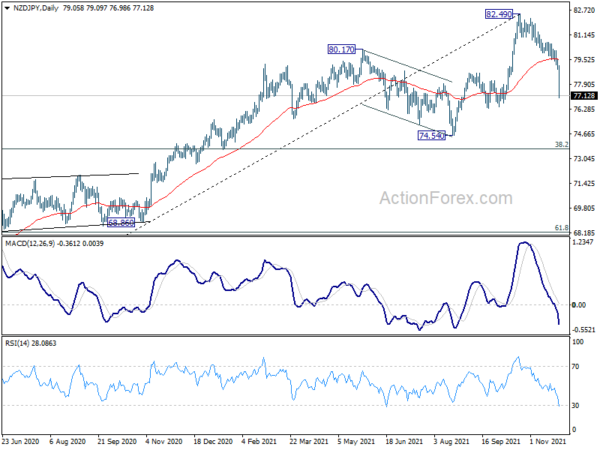 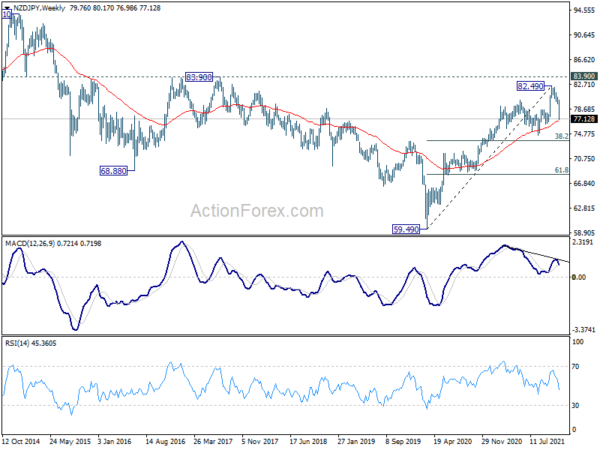 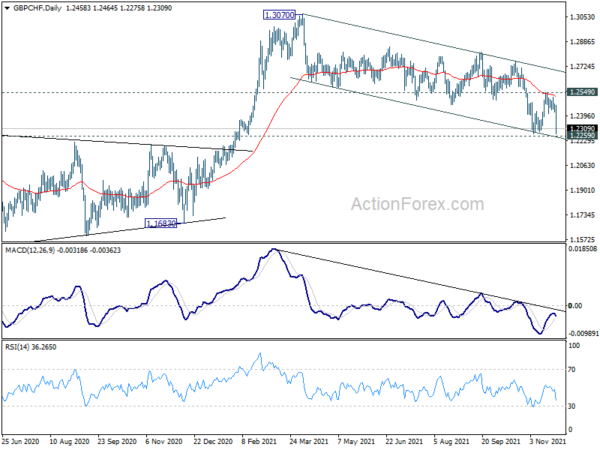 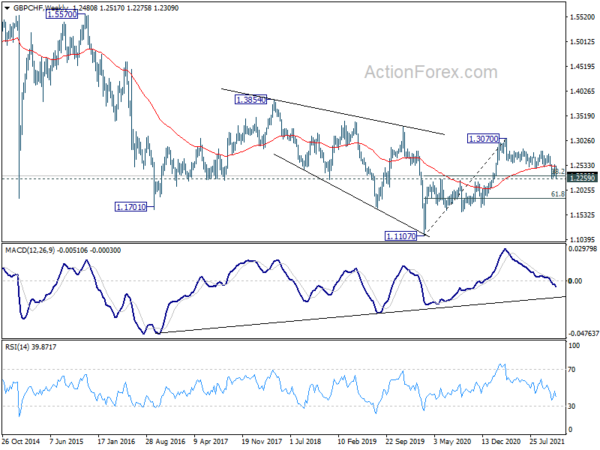 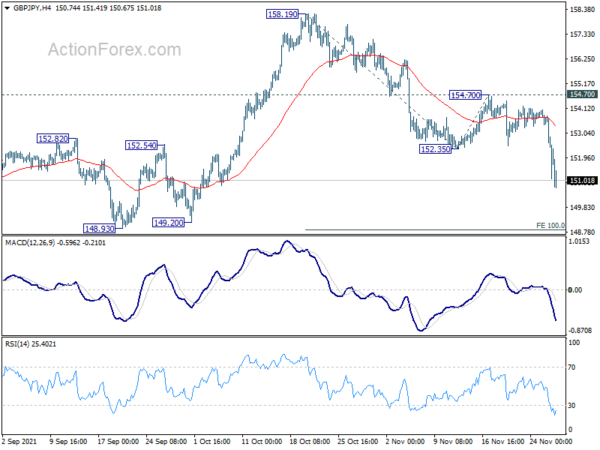 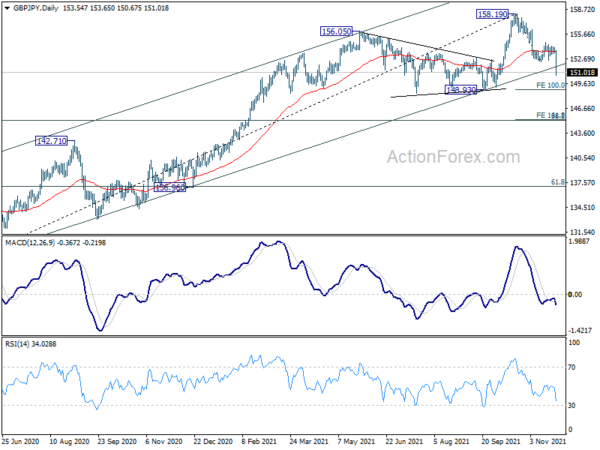 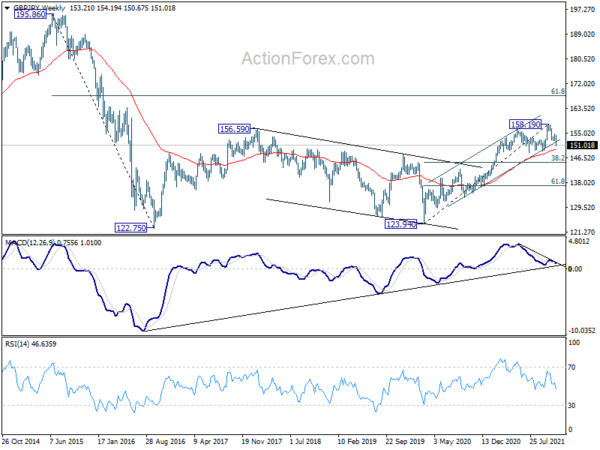 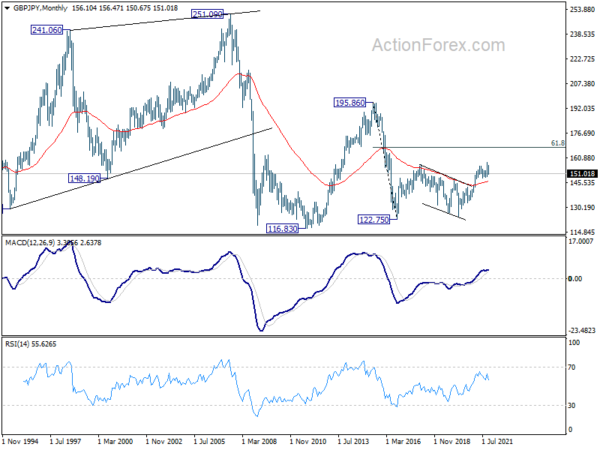