Dollar is back under pressure again as risk-on sentiments seem to be back as indicated by US futures. Swiss Franc and Euro are not too far away, as both turn softer, while Yen is following. On the other hand, New Zealand Dollar continues to lead the way after RBNZ’s halt of asset purchase program. Canadian Dollar is also firm as focus turns to BoC policy decision, at which further tapering should be announced.

Technically, Gold’s upside breakout suggests that rebound from 1750.49 has resumed. Notable support was seen from 4 hour 55 EMA, which is a near term bullish sign. Further rise is expected as long as 1798.44 support holds, targeting 61.8% retracement of 1916.30 to 1750.49 at 1852.96. Sustained break there will pave the way to 1916.30 key structural resistance. Such development could be an indication of more downside in Dollar ahead. 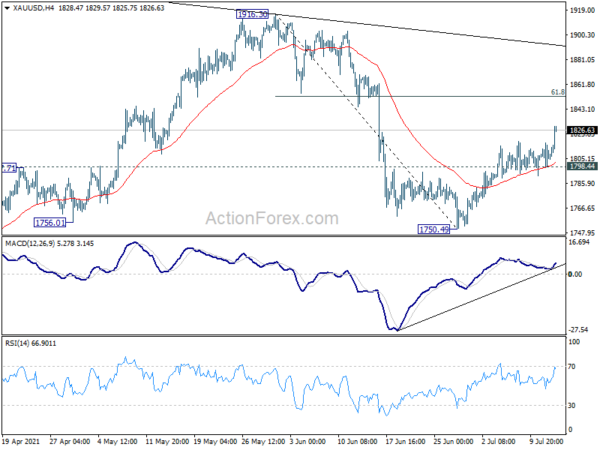 US PPI accelerated to new record of 7.3% yoy

From Canada, manufacturing sales dropped -0.6% mom in May, better than expectation of -1.1% mom.

BoE Cunliffe not expecting smooth reopening, but with bumps in way

BoE Deputy Governor Jon Cunliffe told CNBC, “one shouldn’t expect the reopening of the economy to be smooth, this is not something that you can just close down and reopen without bumps in the way.” He admitted, “we’re seeing a surge in demand. We’re seeing some constrictions in supply that’s driving inflation.”

“Are these factors that the economy will then adjust, supply will recover and adjust, and demand after the initial burst will cool off, or is this something more persistent that will become embedded in people’s expectations?” he questioned. But he emphasized that BoC will try to analyze the situation as the economy returns tor normal.

Eurozone industrial production dropped -1.0% mom in May, EU down -0.9% mom

Australia Westpac-Melbourne Institute Consumer Sentiment rose 1.5% to 108.8 in July, up from 107.2. Confidence has “held up overall” despite a sharp fall in New South Wales, as Victoria and Western Australia recorded strong “bounce-backs”.

Westpac said RBA is not expected announce any change at August 3 meeting. The focus would mainly be on the Statement on Monetary Policy on August 6. RBA would have a few more weeks to assess the impact of the lockdown in Sydney.

RBNZ surprised the markets as it announced to halt the additional asset purchases under the Large Scale Asset Purchase (LSAP) program by July 23. Meanwhile, OCR was kept unchanged at 0.25%. and the Funding for Lending Program was maintained. The Committee agreed that “the level of monetary stimulus could now be reduced to minimise the risk of not meeting its mandate.”

The central bank said the economy “remains robust” despite ongoing impact from international border restrictions. Aggregate economic activity is already “above its pre-COVID-19 level”. It expected “near-term spikes” in headline CPI in Q2 and Q3, reflecting “one-off” or “temporary” factors. In the absence of any further significant shocks, “more persistent consumer price inflation pressure is expected to build over time due to rising domestic capacity pressures and growing labour shortages”. 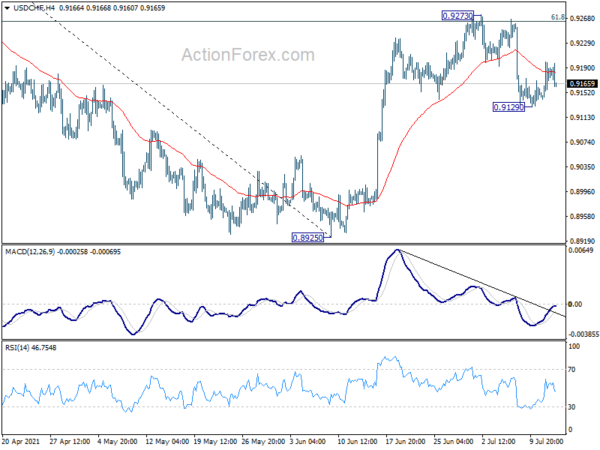 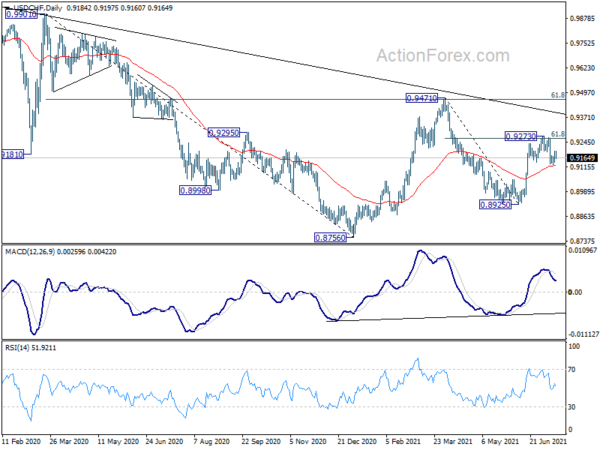 Kiwi Surges on RBNZ, Focus on BoC Next