Overall markets are rather mixed so far, as guided by the volatile risk sentiment. There is no clear follow through moves in the markets. Sterling is the strongest one for the week so far, after the surprised BoE rate hike. But Swiss Franc is the second strongest, as helped by some safe haven flow. Canadian Dollar is the worst performing, while even the strong Aussie is losing much momentum. Dollar and Euro are mixed and they’re still bounded in range against each other.

Technically, Gold is probably displaying the clearest picture. A short term bottom is formed at 1752.32 with break of 1792.94 resistance. It’s supported by bullish convergence condition in 4 hour MACD too. Fall from 1877.05 should be finished. If Gold could grab firm hold above 1800 handle, there is prospect of further rise back to 1877.05 resistance. That, if happens, would be a sign of Dollar weakness. 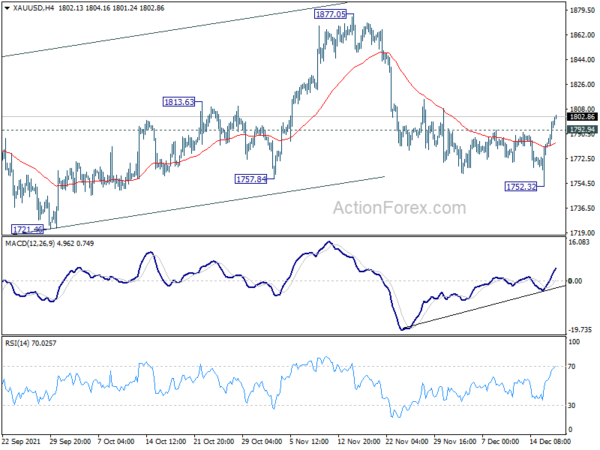 Under the yield curve control, BoJ kept short-term policy interest rate unchanged at -0.10%, and 10-year JGB target at around 0% without upper limit to purchases. It will continue to buy ETFs and J-REITs with upper limits of JPY 12T and JPY 180B respectively on annual paces.

The Special Program to Support Financing in Response to the Novel Coronavirus is extended in part by six months until the end of September 2022. The additional purchases of commercial paper and corporate bonds will be complete at the end of March 2022 as scheduled with outstanding amounts gradually drop back to pre-pandemic levels.

BoJ said, “Japan’s economy is projected to continue growing at a pace, albeit slower, above its potential growth rate.” Core CPI is “likely to increase moderately in positive territory in the short run,” and “projected to increase gradually as a trend”.

The course of COVID-19 continues to warrant attention”. There are “high uncertainties over whether the resumption of economic activity can progress smoothly”. Attentions should also be paid to risk that “effects of supply-side constraints seen in some areas will be amplified or prolonged.”

ANZ said: “Unfortunately the cloud of uncertainty that hangs over 2022 is not a great deal smaller, nor fluffier… Labour shortages and cost pressures rank high in firms’ list of concerns, and freight disruptions are getting worse… But having trouble meeting demand is probably a better problem to have than not having enough demand.

Joe Staton, Client Strategy Director, GfK says: “News about the Omicron variant could not have arrived at a worse time for festive celebrations… We end 2021 on a slightly depressed note and it looks like it will be a bleak midwinter for UK consumer confidence possibly with new COVID curbs and little likelihood of any real uplift in the first months of 2022.” 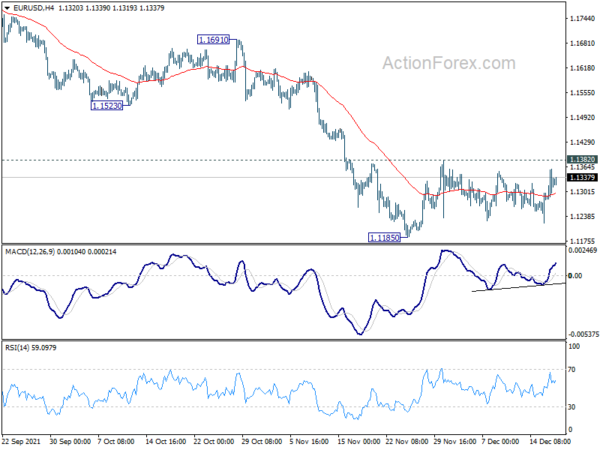 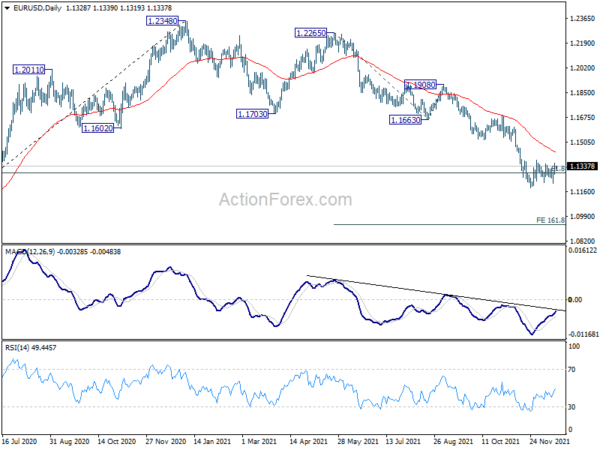 Yen Rises as Investors Back in Risk Averse Mode