Dollar turn softer again in Asian session today and looks set to extend recent decline. But overall markets are quiet so far, with major pairs and crosses staying inside Friday’s range. Economic calendar is likely today and focuses will be on whether broad risk markets would take the lead. Oil price is doing its job in extending recent rise but stocks are sluggish so far. Nevertheless trading would come back alive later in the week with three central bank meetings and some important economic data.

Technically, 1.1668 temporary top in EUR/USD is a focus today, and break will resume the rise from 1.1523. 55 day EMA (now at 1.1705) would be a hurdle to overcome and break will be a sign of near term bullishness. At the same time, we’d see if EUR/CHF could rebound from 1.0655 fibonacci projection level and aid EUR/USD’s rise. 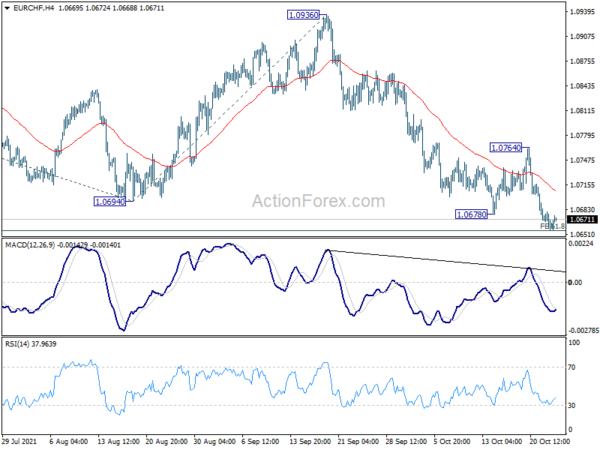 Silver hit as high as 24.81 last week but lost momentum ahead of 24.86 near term resistance. For now, further rise will remain mildly in favor as long as 23.55 minor support intact. Sustained break of 24.86 will argue that whole corrective pattern from 30.07 has completed with three waves down to 21.41. In such case, near term outlook will be turned bullish for 28.73/30.07 resistance zone. However, rejection by 24.86 will retain near term bearishness. Break of 23.55 will bring retest of 21.41 low instead. 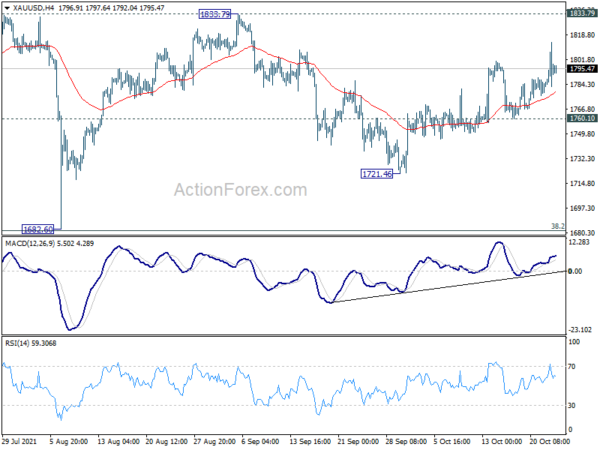 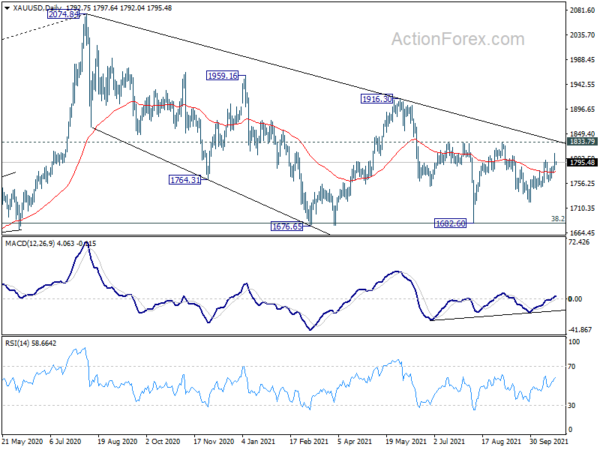 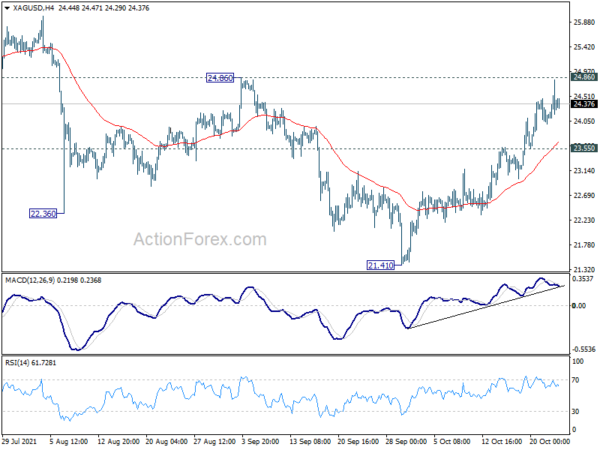 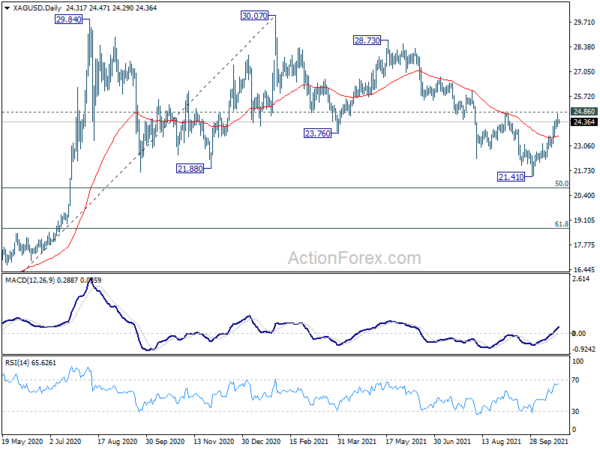 WTI continues up trend, but overbought condition might limit upside at 88

Rally in WTI crude oil continues today and hit another 7-year high at 85.26. Upside momentum remains strong as seen in daily MACD. Further rally is expected to 61.8% projection of 33.50 to 77.16 from 61.90 at 88.88. Nevertheless, considering overbought condition in daily RSI, we’d look for topping signal around there to bring pull back. Meanwhile, break of 8.36 support will argue that a short term top is formed and turn WTI into correction first. 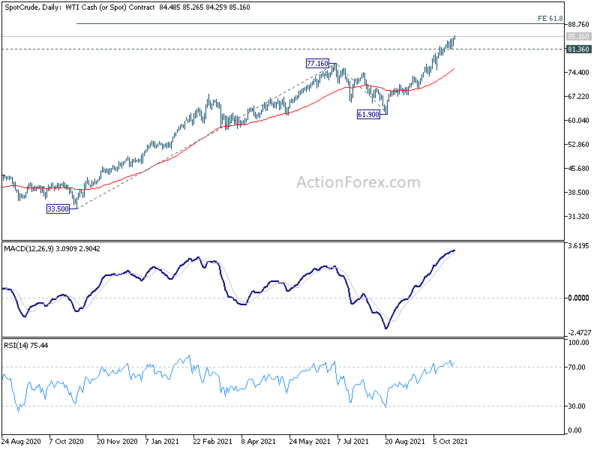 BoC, ECB and BoJ to meet; GDP and inflation to watch

Three central banks will meet this week. BoC is widely expected to continue with tapering, with the target to complete end it in December. The main question is BoC’s view on the timing and pace of rate hike afterwards. Currently, there are speculations that BoC could start raising interest rates as early as in April, to be followed by two more hikes next year.

ECB, on the other hand, is expected to keep policy and the tone unchanged. So far the majority of policymakers continued to talk down the surge in inflation as transitory. President Christine Lagarde could even try to talk down the market pricing of a small 10bps hike next year. As with the PEPP expiration next March, ECB would also keep the cards close to chest until December.

BoJ is also not expected to do anything for the near future. While inflation is hot in some parts of the world like the US and UK, it’s close to no inflation in Japan.

On the data front, there will be GDP data from US, Eurozone and Canada, as well as inflation data from US Germany, Australia, and Japan. The calendar is particularly busy from Wednesday onwards. Here are some highlights for the week:

Intraday bias in EUR/USD remains neutral for the moment, as consolidation from 1.1668 could extend. But further rally is expected as long as 1.1571 support holds. Break of 1.1668 will target 55 day EMA (now at 1.1705). Sustained break there will be a sign that larger correction from 1.2348 has completed. Stronger rally would be seen to 1.1908 resistance for confirmation. On the downside, though, break of 1.1571 minor support will turn bias back to the downside for 1.1523 support instead. 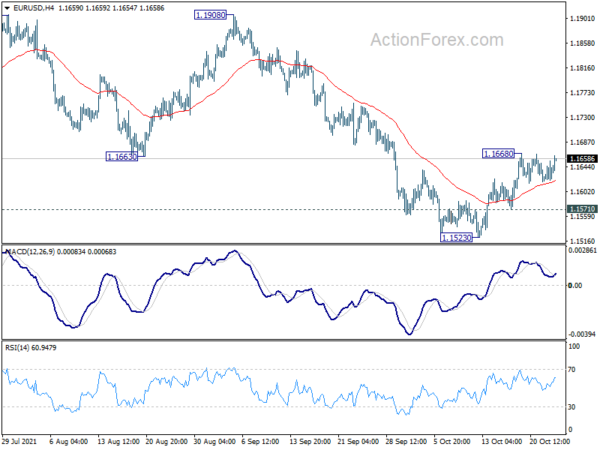 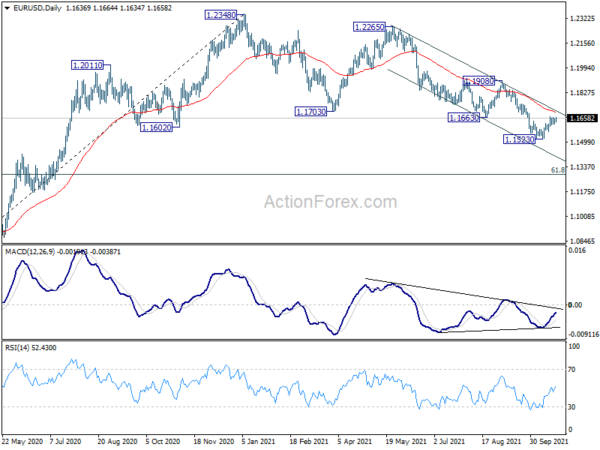