Dollar is pick up some upside momentum as markets enter into US session. Overall trading is rather subdued though. Economic calendar is near empty today while central bankers’ comments are largely ignored. Sterling is currently a firmer one together with the greenback. Swiss Franc is the worst performing one, together with commodity currencies.

Technically, as Dollar strengthen, focus will turn to near term temporary top against other major currencies. Levels to watch include 1.1846 support in EUR/USD, 111.10 resistance in USD/JPY, and 0.9237 resistance in USD/CHF. Additionally, 1760.71 support in also will also be watched to double confirm Dollar’s rally. 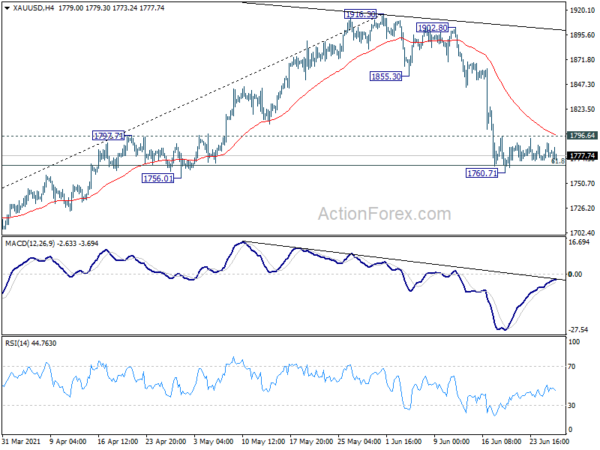 ECB Panetta: Conditions for second round inflation inflation not in place

ECB Executive Board member Fabio Panetta said in a speech, “the likelihood that demand in the euro area will be strong enough to test the supply constraints of the economy – beyond short-term bottlenecks – does not look as high as in the United States.”.

Eurozone inflation “will rise this year” he added, “but this will be a temporary increase”. Policymakers do not see ” convincing signs that this upward movement will translate into a sustained inflationary process.” Also, “the risk of second-round effects remains limited, as the conditions for them to emerge are not yet in place.”

Bundesbank Weidmann: PEPP must be ended when emergency is over

Bundesbank President Jens Weidmann said today that the “coming year would not be a crisis year if assumptions about the pandemic are confirmed.” Also, “PEPP must be ended when the emergency is over”.

He explained that the “preconditions” for ending net PEPP purchases are that “all major restrictions are lifted”, and the recovery is “solid”. Immediate measures should then be reduced in both the fiscal and monetary front.

Net PEPP purchases could be reduced “step by step” in advance.

SNB board member Andrea Maechler said that the central bank is “not anywhere close to” normalization as “expansionary monetary policy is absolutely needed”. She added that “the negative rate of minus -0.75% and interventions are needed to relieve pressure on the franc as needed.”

The bank still see inflation “staying below 1%”, labor utilization “below what it can be”, and Franc “continues to be highly valued”, she said.

BoJ: A virtuous cycle has started to operate thanks to vaccinations

In the summary of opinions of BoJ’s June 17-18 meeting, it’s reiterated that the economy has “picked up as a trend” although it remains in a “severe situation”. A “virtuous cycle” has “started to operate”, partly owing to the progress with vaccinations. The economy is “likely to recover” with impact of COVID-19 “waning gradually”.

Also, as vaccinations have been “progressing rapidly of late”, the economy is expected to “to a certain extent in the short run, mainly due to an expansion in pent-up demand for consumption of face-to-face services”.

Also, members noted that “until it becomes certain that the impact of COVID-19 has subsided, it is important to steadily continue with policy responses”. Financing of firms is “likely to remain under stress”. Face-to-face services consumption will be “constrained” and there remains a risk that “concern over financing will emerge”. Hence, it’s desirable to extend the duration of the Special financing program by six months. 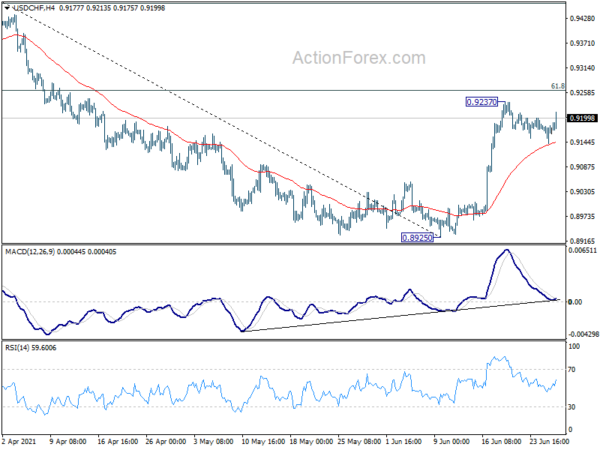 In the bigger picture, medium term bearishness is neutralized by strong break of 55 week EMA. Focus is back on 0.9471 resistance. Sustained break there will indicate completion of whole decline from 1.0342 (2016 high). Medium term outlook will be turned bullish for a test on 1.0342 high. 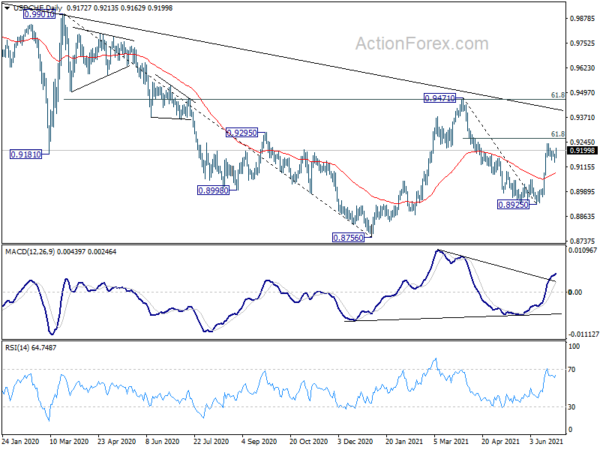