Dollar and Yen dropped sharply overnight on strong risk-on market, as NASDAQ finally caught up and made new record high. The greenback is additionally pressured by the delayed buying in Euro after ECB post-meeting press conference. For now, Canadian Dollar is the third weakest, following the retreat in oil price. On the other hand, Aussie is the strongest one for the week on speculation that RBA would pull ahead rate hikes, while Swiss Franc and Kiwi follow.

Technically, we’re not too convinced by Euro’s buying yet, even though EUR/USD did resumed near term rebound. There is no sign in bottoming in EUR/CHF as recent fall from 1.0936 is extending. EUR/AUD is kept below 1.5598 minor resistance. Nevertheless, EUR/GBP is now pressing 0.8467 minor resistance while EUR/CAD is pressing 1.4439. Break of these two levels could sign that Euro’s rebound is more broad based. But, we’ll see. 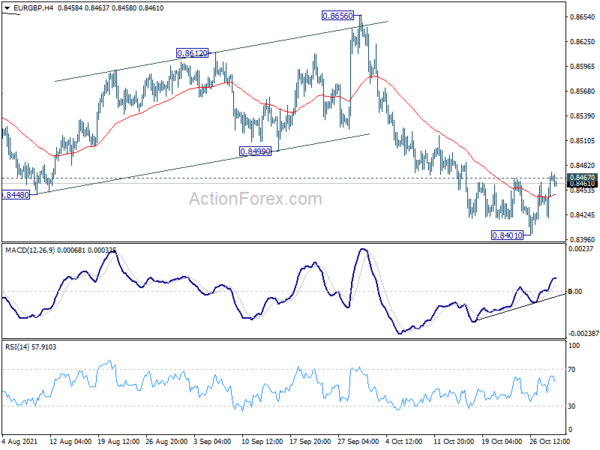 Japan industrial production dropped -5.4% mom in Sep, but expected to bounce back strongly ahead

Japan industrial production dropped sharply by -5.4% mom in September, much worse than expectation of -2.4% mom. The seasonally adjusted index of production at factories and mines dropped for the third straight month to 89.5, against the 2015 100 base of 100.

But looking ahead, the Ministry of Economy, Trade and Industry said output would bounce back by 6.4% in October, and then 5.7% in November, based on a poll of manufacturers. An official said, “output may have hit bottom in September since economic activities have been returning to normal in countries such as Vietnam and Malaysia since late September, and a recovery is expected, mainly in the auto industry.”

Australia retail sales rose 1.3% mom in September, much better than expectation of 0.2% mom. That’s the first monthly growth since May. For the 12-month, sales rose 1.7% yoy.

“Retail turnover continues to vary by state, based on whether restrictions were imposed, removed or extended. Queensland sales rose to their highest level ever, up 5.2 per cent, with no lockdowns in September,” Ben James, Director of Quarterly Economy Wide Statistics said.

“New South Wales also experienced a rise of 2.3 per cent despite having lockdowns, as some restrictions were eased or lifted. However, turnover for New South Wales remains 11.9 per cent lower than May 2021, the month before the most recent lockdown began.”

Later in the data, Canada will release GDP, IPPI and RMPI. US will release personal income and spending, and PCE inflation.

EUR/USD’s rebound from 1.1523 resumed by breaking 1.1668 temporary top. Intraday basis back on the upside for further rally. Sustained break of 55 day EMA (now at 1.1690) will be a sign that larger correction from 1.2348 has completed. Stronger rally would be seen to 1.1908 resistance for confirmation. On the downside, though, break of 1.1581 minor support will turn bias back to the downside for 1.1523 low instead. 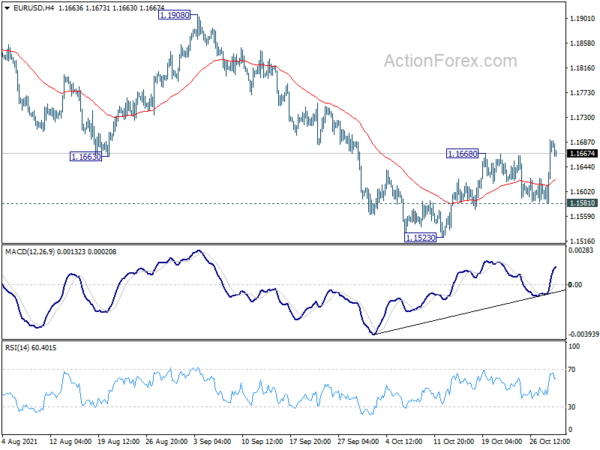 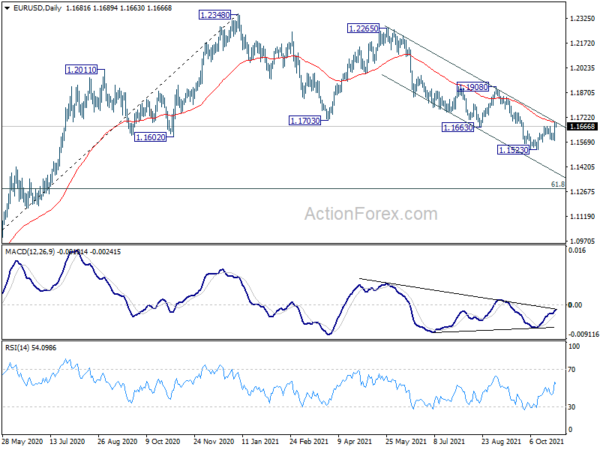