Canadian Dollar rises strongly entering into US session, as boosted by much stronger than expected job data. On the other hand, Dollar is struggling to react to mixed non-farm payroll data. As for today, the Loonie is the strongest one, followed by Swiss Franc and Euro. Aussie and Kiwi are so far the worst. But, the picture may change before weekly close.

Technically, while USD/CAD retreats, further rise will remain in favor as long as 1.2639 support holds. At the same time, AUD/USD resumes near term down trend by breaking through 0.7061 support. We’ll see if there is any pre-weekend wild moves in the stock markets to drive further moves in commodity currencies. 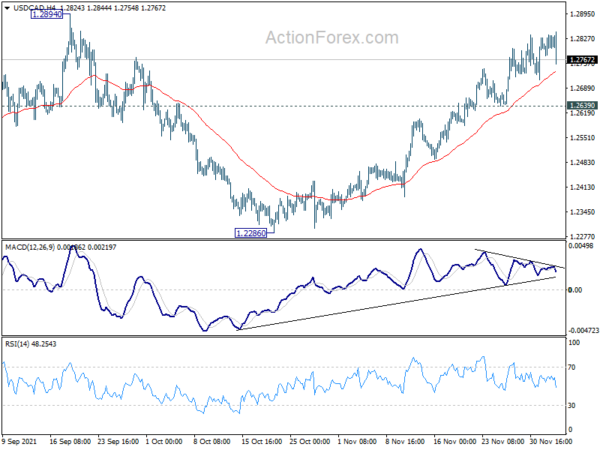 US NFP grew only 210k, but unemployment rate dropped to 4.2%

US non-farm payroll employment grew only 210k in November, well below expectation of 525k. So far this year, monthly job growth has averaged 555k. Overall employment remained down by -3.9m, or -2.6%, from its pre pandemic level in February 2020.

Canada employment grew 154k in November, well above expectation of 37k. It’s now 1% higher than its pre-COVID February 2020 level. Unemployment rate dropped sharply from 6.7% to 6.0%, much better than expectation of 6.6%.

ECB Lagarde: Inflation will decline in 2022

ECB President Christine Lagarde said in a conference, “We are firmly of the view, and I’m confident, that inflation will decline in 2022.” She described the inflation profile as a “hump”, and while it’s now at a high level of the hump for Eurozone, ” a hump eventually declines.”

Lagarde also said that energy prices will have declined significantly by the end of 2022. But supply bottlenecks will take until mid-2022 or end 2022 to end.

Eurozone retail sales rose 0.2% mom in October, below expectation of 0.3% mom. Volume of retail trade increased by 1.3% for automotive fuels and by 0.4% non-food products, while it fell for food, drinks and tobacco by 0.1%.

“An improvement in the rate of economic growth signalled by the eurozone PMI looks likely to be short-lived. Not only did demand growth weaken, but firms’ expectations of future growth also sank lower as worries about the pandemic intensified again. With the data collected prior to news of the Omicron variant, sentiment about near-term prospects will inevitably have been knocked even further….

“While growth risks have shifted to the downside, risks to the inflation outlook seem tiled to the upside if virus case numbers continue to rise and new restrictions are introduced. Supply chains will be further hit, staff availability will deteriorate and spending could shift from services to goods again, further exacerbating the imbalance of supply and demand.”

France PMI Services was finalized at 57.4 in November, up from 56.6 in October, signalling the strongest growth since June. PMI Composite was finalized at 56.1, up from October’s 54.7. Markit said strong jobs growth sustained as business activity continued to grow. Firms reported still-strong demand pressures. output prices rose at fastest rate since June 2011.

BoE MPC member Michael Saunders, a known hawk, said in a speech that “policy is not on auto pilot”. He added. “the pace, and scale, of any monetary policy changes will depend on economic developments and the outlook”.

“In particular, at the December meeting, a key consideration for me will be the possible economic effects of the new Omicron Covid variant, and the potential costs and benefits of waiting to see more data on this before – if necessary – adjusting policy,” he said.

“It is likely that any rise in Bank Rate will be limited given that the neutral level of interest rates remains low. Provided we do not delay too long, it should be a case of easing off the accelerator rather than applying the brakes,” he noted.

“Surging price pressures have done little to dent business and consumer spending across the UK economy… The overall speed of recovery looks to have accelerated in comparison to the third quarter of 2021, with output growth mostly driven by services as manufacturers struggle with severe shortages of raw materials and critical components.

“The vast majority of survey responses in November were received prior to the news of the Omicron variant, however, which has the potential to derail near-term growth prospects and add to international supply chain disruption.

Wang Zhe, Senior Economist at Caixin Insight Group said: “Overall, conditions in the manufacturing sector remained stable in November, while for the service sector, expansion occurred at a slightly slower pace. The downward pressure to the economy grew, and inflationary pressure was partly eased….

“The government’s measures to stabilize commodity supplies and prices significantly eased cost pressures on manufacturing enterprises, but had a limited impact on the reduction of costs to service enterprises. Overall, inflationary pressure remained.”

Range trading continues in EUR/USD and intraday bias remains neutral first. On the upside, firm break of 1.1382 resistance should confirm short term bottoming at 1.1186. Intraday bias will be turned back to the upside for 55 day EMA (now at 1.1495). On the downside, break of 1.1185 will resume larger fall from 1.2348. 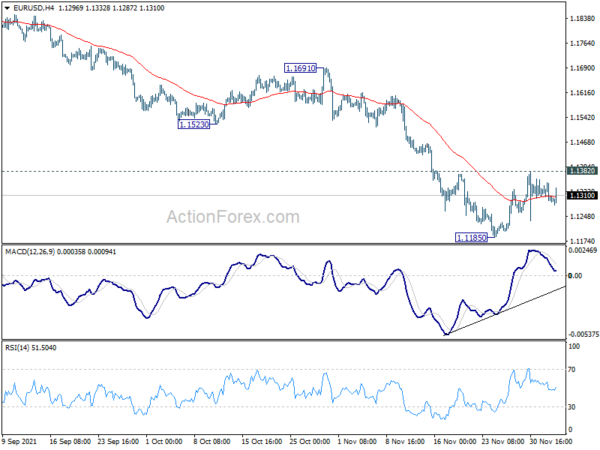 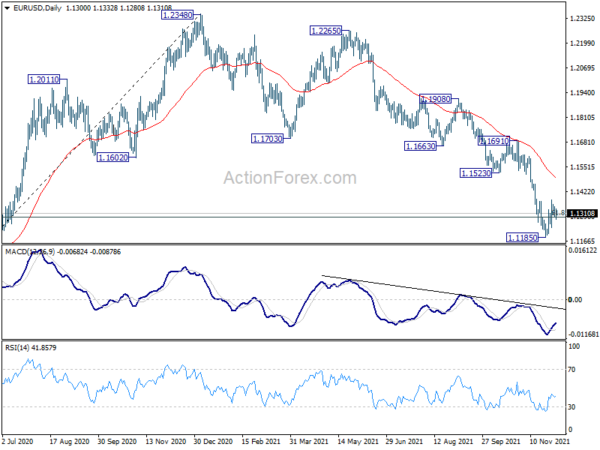